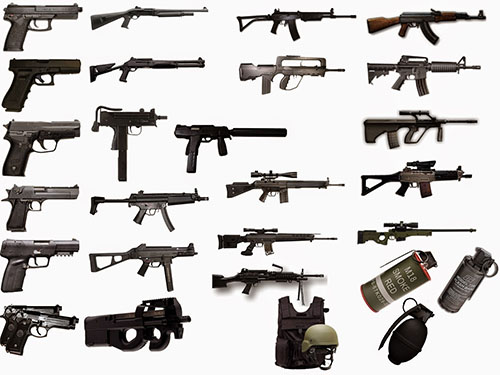 Today we are going to talk about some basic weapons in Counter-Strike 1.6. In the article we are going to cover the start pack as well as most popular CS 1.6 rifles and some useful techinques.

Standard weapon pack in CS 1.6, the one that you get for free at round start most likely will not be enough for a decent fight: a knife and a pistol. In order to fill your inventory with something more powerful like an automatic rifle you will have to access the in-game store, that can be done right at the spawn (button B). However, here we stumble into something unpleasant: your start money amount will only buy some Kevlar and ammo for the pistol (or an alternative pistol of your choice). In order to earn money for Ak-47 or M4 you will have to make some frags. Each kill earns you some in-game money, which will allow you to buy something heavier like an Ak or even such a luxury as a sniper rifle.

However, let us line out the standard first round variations: knife and a pistol. Depending on the team you chose (CT or T), you will have different pistols to start with. If you're playing as a CT, you get a very decent USP pistol. The gun is one of the best ones in the game. It carries good accuracy on both short and long distances and has a good damage. One bullet will be enough to head-shot kill an enemy. Practically you don't need anything else for the first round, just a Kevlar and some ammo. Remember to always buy Kevlar first before the ammo, otherwise you may end up with not enough credits for it.

If you're playing for the Terrorist team, you're in a much worse luck - you get Glock. The gun is practically not too bad on short distances. It carries 20 bullets in a clip and has somewhat interesting firing modes (e.g. 3 bullets at a time). On long distances this pistol is fairly useless and can only be used to slow down an enemy or to finish somebody. So, playing as a Т, it's useful to purchase a more powerful pistol. 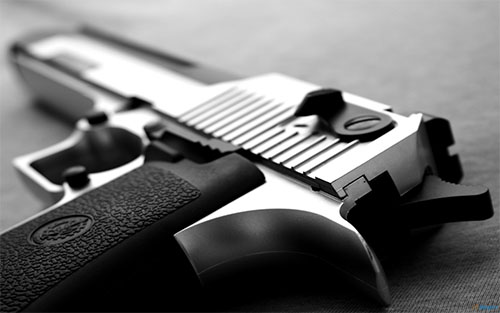 Third variation that we are going to cover is the legendary Desert Eagle. The gun power of it is the strongest throughout all the in-game pistols. Disadvantages: slow firing speed and only seven bullets in a clip. Nevertheless the pistol is still the best one in the game and can easily create a decent competition to some in-game rifles. The gun is the best friend of snipers who carry it along side with AWP (sniper rifle).

Knife may be very useful as well. One hit to an enemy's back or head will earn you an instant frag. Hitting other parts of the body with the second attack will only carry a 65% damage which mean you will need two hits in order to kill a 100% healthy enemy. Obviously the knife can be used only in a short distance combat. It is recommended to use in an extreme case only.

Now let us talk about most popular types of heavier weapons. Ak47 and M4A1 - two automatic rifles that will serve you during the whole game. Ak47 inflicts a heavier damage while M4 carries more accuracy. As with every weapon in the game it will take you some time to get used to these guns. When you're ready however, you'll be able to inflict head-shots with every shot you make. A word ov advice: fire no more than two or three bullets in a row with an Ak, and don't go over five bullets with a M4 in order to maintain accuracy. Do not put silencer onto your М4 if you want to minimize the spread.

aWp - sniper rifle: the most powerful long distance rifle in the game, slow firing speed, slow moving speed, pretty hard to learn good skill. However, when you're skilled enough, this weapon makes you pretty much invincible. Enemies will be dropping dead the moment they notice you in the distance. Words of advice: make a quick switch to a secondary weapon and back every time you fire - this will shorten the time between the shots, never move with the zoom on, learn Fast-Zoom technique. How Fast-Zoom works. If you try to shoot an enemy without zooming chances are you will miss even if the enemy position right in the center of the screen. However, if you activate the zoom just before the firing and making the shot before the appearing of the actual zoom the bullet will hit the target 100% accurately.

It isn't easy to learn Fast-Zoom technique. Some players put a gum in the center of the screen to ease their lives but we recommend only practice. Just do as much training as possible and after a week or two aWp will become your best friend. Try practicing with bots first. For that, download CS 1.6 from our website, launch it, in the game menu choose New Game and tick "Include CPU players" on before pressing "Start". To add additional bots during the game press "H". In order to learn aWp it's best to chose "Easy" difficulty, as your main goal will be learning to shoot moving targets. Good luck!